I think that Ronald Reagan’s speech in 1964 at the Republican National Convention is as relevant today as then. We could use a dose of that medicine right now and I think the following paragraph from that speech sums it up:

“Not too long ago two friends of mine were talking to a Cuban refugee, a businessman who had escaped from Castro, and in the midst of his story one of my friends turned to the other and said, "We don't know how lucky we are." And the Cuban stopped and said, "How lucky you are! I had someplace to escape to." In that sentence he told us the entire story. If we lose freedom here, there is no place to escape to. This is the last stand on Earth. And this idea that government is beholden to the people, that it has no other source of power except to sovereign people, is still the newest and most unique idea in all the long history of man's relation to man. This is the issue of this election. Whether we believe in our capacity for self-government or whether we abandon the American Revolution and confess that a little intellectual elite in a far-distant capital can plan our lives for us better than we can plan them ourselves.”

We would be wise to quickly look at how far we have come in so short a time.
Posted by Jeff at 11:15 AM

Duncan gets "FITS NEWS" shout out

Will Folks over at FITS News picked up on my support of the "Government Ownership Exit Plan Act of 2009" introduced by Senator John Thune, South Dakota.

Legislation would stop the purchase of private entities, set a timetable to sell assets, re-privatize Fannie & Freddie, and create penalties for elected officials attempting to influence the management of private businesses

Clinton, S.C. – June 18, 2009 – Laurens County legislator and third congressional district candidate Jeff Duncan sent an open letter to the SC Congressional delegation today, urging them to support the Government Ownership Exit Plan Act of 2009. The legislation which originated from Senator John Thune R-SD, sets clear restrictions on the use of federal TARP funds. The legislation immediately blocks the federal government from purchasing of any additional shares of private businesses and sets a deadline of July 1, 2009 for the government to sell any remaining corporate holdings.

The Troubled Asset Relief Program or TARP was originally established to purchase “toxic assets” from banks and other corporate organizations. However, most of the near $800 billion in TARP funds have instead been used to purchase ownership stakes in automotive companies and financial institutions. Another controversy has arisen over the “recycling” of TARP funds. Under the status quo, when corporations pay back the TARP funds to the federal government, instead of the revenue being used to pay down the deficit, the money is returned to the TARP fund for the purchasing of more corporate assets.

“The government’s intrusion into the management of private businesses is disgraceful, and un-American. The GOEP Act is the first step towards returning some fiscal sanity to Washington. President Obama has said that he wants to end the government ownership of businesses as soon as possible. Therefore I see no reason why he, his colleagues, and all Republican members of Congress would not support this legislation in its entirety,” said Rep. Jeff Duncan.

Rep. Duncan states that he felt it was important to bring this legislation to the attention of the voters in the 3rd Congressional District. “Everywhere I’ve traveled in the district, voters have been furious with the irresponsibility they have seen lately in Washington. When I learned of Senator Thune’s legislation, I wanted to act and show the voters of South Carolina that there is a clear and reasonable solution to this particular problem. We can’t afford to wait another day without taking action on this issue, and that is why I’m urging South Carolina’s Congressional delegation to act immediately to address the problem.”

Rep. Jeff Duncan is running for the 3rd Congressional District seat being vacated by Congressman Gresham Barrett.
Posted by Jeff at 12:48 PM

Stabilization or "Stimulus" Fund - The Bill

With all of the hoopla over the "Stimulus" money - I decided to look the actual bill up and read it for myself.....I am going to try to highlight in RED who has responsibility to spend the money.....I haven't seen the "Clyburn" Amendment - but it is clear that the Legislative intent of Congress is to give the Governor the spending authority.......maybe the SC Supreme Court sees something I don't in here or has more information than is on the U. S. Dept. of Education web site at:

This is posted here for you to decide for yourself.....if you so choose to be informed.....

American Recovery and Reinvestment Act of 2009

President Obama: "We're out of money..."

In a sobering holiday interview with C-SPAN, President Obama boldly told Americans: "We are out of money."

SCULLY: You know the numbers, $1.7 trillion debt, a national deficit of $11 trillion. At what point do we run out of money?

OBAMA: Well, we are out of money now. We are operating in deep deficits, not caused by any decisions we've made on health care so far. This is a consequence of the crisis that we've seen and in fact our failure to make some good decisions on health care over the last several decades.

So we've got a short-term problem, which is we had to spend a lot of money to salvage our financial system, we had to deal with the auto companies, a huge recession which drains tax revenue at the same time it's putting more pressure on governments to provide unemployment insurance or make sure that food stamps are available for people who have been laid off.

So, one option is just to do nothing. We say, well, it's too expensive for us to make some short-term investments in health care. We can't afford it. We've got this big deficit. Let's just keep the health care system that we've got now.

SCULLY: When you see GM though as “Government Motors,” you're reaction?

OBAMA: Well, you know – look we are trying to help an auto industry that is going through a combination of bad decision making over many years and an unprecedented crisis or at least a crisis we haven't seen since the 1930's. And you know the economy is going to bounce back and we want to get out of the business of helping auto companies as quickly as we can. I have got more enough to do without that. In the same way that I want to get out of the business of helping banks, but we have to make some strategic decisions about strategic industries...

SCULLY: States like California in desperate financial situation, will you be forced to bail out the states?

OBAMA: No. I think that what you're seeing in states is that anytime you got a severe recession like this, as I said before, their demands on services are higher. So, they are sending more money out. At the same time, they're bringing less tax revenue in. And that's a painful adjustment, what we're going end up seeing is lot of states making very difficult choices there...

SCULLY: William Howard Taft served on the court after his presidency, would you have any interest in being on the Supreme Court?

OBAMA: You know, I am not sure that I could get through Senate confirmation...
Posted by Jeff at 8:01 AM

A San Diego pastor and his wife claim they were interrogated by a county official and warned they will face escalating fines if they continue to hold Bible studies in their home.

The couple, whose names are being withheld until a demand letter can be filed on their behalf, told their attorney a county government employee knocked on their door on Good Friday, asking a litany of questions about their Tuesday night Bible studies, which are attended by approximately 15 people.

"Do you have a regular weekly meeting in your home? Do you sing? Do you say 'amen'?" the official reportedly asked. "Do you say, 'Praise the Lord'?"

She says she was then told, however, that she must stop holding "religious assemblies" until she and her husband obtain a Major Use Permit from the county, a permit that often involves traffic and environmental studies, compliance with parking and sidewalk regulations and costs that top tens of thousands of dollars.

Dean Broyles of the Western Center for Law & Policy, which has been retained to represent the couple, told WND the county's action not only violates religious land-use laws but also assaults both the First Amendment's freedom of assembly and freedom of religion.

He continued, "If one's home is one's castle, certainly you would the think the free exercise of religion, of all places, could occur in the home."

Broyles confirmed the county official followed through on his threat. The pastor and his wife received a written warning ordering the couple to "cease/stop religious assembly on parcel or obtain a major use permit."

"The Western Center for Law and Policy is troubled by this draconian move to suppress home Bible studies," said the law center in a statement. "If the current trends in our nation continue, churches may be forced underground. If that happens, believers will once again be forced to meet in homes. If homes are already closed by the government to assembly and worship, where then will Christians meet?"

On a personal note, Broyles added, "I've been leading Bible studies in my home for 13 years in San Diego County, and I personally believe that home fellowship Bible studies are the past and future of the church. … If you look at China, the church grew from home Bible studies. I'm deeply concerned that if in the U.S. we are not able to meet in our homes and freely practice our religion, then we may be worse off than China."

Broyles also explained to WND that oppressive governments, such as communist China or Nazi Germany, worked to repress home fellowships, labeling them the "underground church" or "subversive groups," legally compelling Christians to meet only in sanctioned, government-controlled "official" churches.

"Therein lies my concern," Broyles said. "If people can't practice their religious beliefs in the privacy of their own homes with a few of their friends, that's an egregious First Amendment violation."

WND contacted a spokeswoman for San Diego County, who acknowledged the description of the incident seemed "bizarre," but who was unable to locate the details of the account. She simply could not provide comment yet, she said, until she could become familiar with the case.

Broyles said the WCLP is nearly ready to file a demand letter with the county to release the pastor and his wife from the requirement to obtain the expensive permit. If the county refuses, Broyles said, the WCLP will consider a lawsuit in federal court.

Broyles also told WND the pastor and his wife are continuing to hold the Bible study in their home. 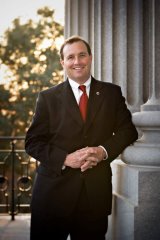 Some of My Favorites